WAKING UP WITH A RAKE 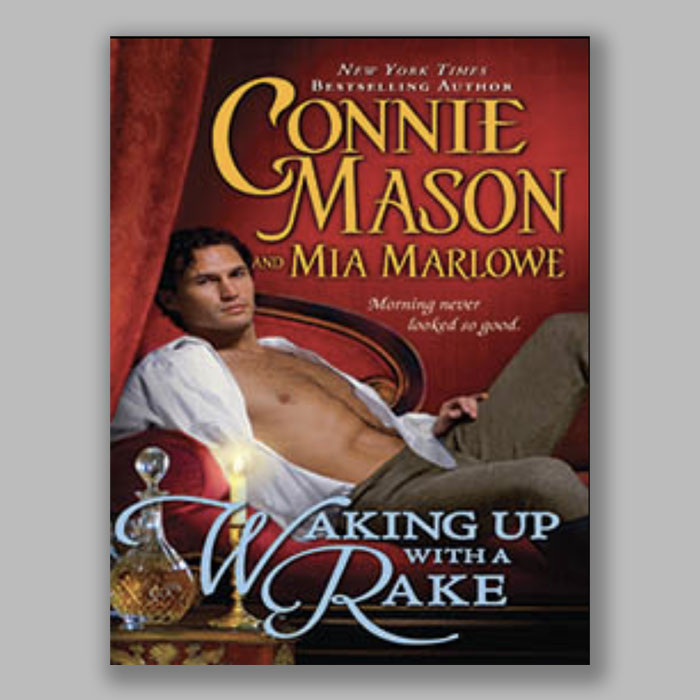 Title: Waking Up with a Rake

The Fate of England's Monarchy Is In The Hands of Three Notorious Rakes.
To prevent three royal dukes from marrying their way onto the throne, heroic, selfless agents for the crown will be dispatched...to seduce the dukes' intended brides. These wickedly debauched rakes will rumple sheets and cause a scandal. But they just might fall into their own trap...

After he's falsely blamed for a botched assignment during war, former cavalry officer Rhys Warrick turns his back on "honor." He spends his nights in brothels doing his best to live down to the expectations of his disapproving family. But one last mission could restore the reputation he's so thoroughly sullied. All he has to do is seduce and ruin Miss Olivia Symon and his military record will be cleared. For a man with Rhys's reputation, ravishing the delectably innocent miss should be easy. But Olivia's honesty and bold curiosity stir more than Rhys's desire. Suddenly the heart he thought he left on the battlefield is about to surrender....

Chapter 1
For the first time in his life, Lord Rhys Warrington wondered if he was too foxed to properly bed a woman.

"Nothing ventured," he murmured as he latched the door behind him and stared at the courtesan lounging on the bed. Light from a dozen candles kissed the curve of her bare shoulder. The boudoir was awash in scent, expensive jasmine, and attar of roses, with a sensual undertone of muskiness.

She smiled, letting the satiny sheet drop enough to reveal the swell of her breasts. The lady knew how to tease. Miranda Doublefield had been Lord Tottenham's mistress for the better part of last Season and had lasted through the turn of the New Year. She might have been petite, but there was nothing the least small about her allure. Her eyelids half closed, she gave him a sultry look.

Despite having consumed enough spirits to drop a horse, Rhys roused to her silent invitation. He was relieved by his body's dependability. A woman like Miranda would trumpet a man's bedroom failures if she thought the tale would amuse and titillate others. Rhys wasn’t her protector and wasn’t likely ever to be. She’d have no need to guard his dignity.

Rhys wasn't interested in acquiring a mistress. Or in any encounter that lasted beyond the moment, for that matter.

Even among the demi-monde crowd, he was alone.

Besides, there was much to commend a bedding that was purely carnal with no bothersome emotions to cloud matters. He'd made a concerted effort to feel nothing since he returned from the Continent, and the result was a hollowness in his chest. He considered it a fair trade for continuing to breathe.

His heart might be dead, but that didn’t stop another part of his anatomy from demonstrating with regularity that it was fully alive. He ached to wallow in Miranda and feel the only dregs of emotion he'd allow himself.

"I fear you may think yourself ill-used," Rhys said, his words slurring only slightly as he weaved toward her. There'd been entirely too much rum in his evening's activities, but at least he was still upright. "Just because your protector was foolish enough to wager a night with you, do not feel yourself bound to honor his gambling debt."

"Ill-used?" She giggled musically. "Nonsense. My fingers were crossed that Totty wouldn't take that final trick. I look forward to being used by you, my lord. Just don't be surprised if I use you right back."

Miranda raised herself to her knees and let the sheet fall completely. As she settled between the plump pillows, she teased him with a glimpse at the shadowy heaven between her legs.

The house party at the St. James love nest where Lord Tottenham kept Miranda had degenerated into a bacchanalia within hours of its beginning. Then it stretched into a sennight of drinking, gambling, and indecent games. Rhys's bedding of Tottenham's mistress under his own roof was probably the least scandalous coupling that would transpire this night.

Rhys wondered absently if Tottenham had bored peepholes into the room to keep an eye on Miranda. If the earl was watching now, Rhys couldn't be bothered to care. Serve the fool right to be cuckolded before his very eyes. Rhys plopped down on the side of the bed, hoping the room would stop spinning, and tried to tug off his Hessians. He really ought to have passed on that last round of Jamaican rum. He'd probably been drunk enough already not to have to worry about troubling dreams later.

Tottenham's mistress wrapped her arms around him, pressing herself against his back. She lavished kisses on his neck and then latched onto his earlobe, sucking hard.

Sinking into Miranda Doublefield's lush softness would be oblivion that trumped an alcoholic haze all to pieces. In the heat and friction of mindless rutting, Rhys could forget.

Or at least pretend he had forgotten, if only for a little while.

He turned and pinned Miranda to the mattress.

"Boots be damned," he declared. If Tottenham didn't mind Rhys despoiling his mistress, he wasn't likely to fuss over ruined sheets. Rhys would take his time with the lady later, but since she seemed more than ready, the first time would be hard and fast. He lost himself in her mouth, in the abandon of suckling tongues and shared breath. Her hands rippled over his body, teasing and stroking. She moaned into his mouth. Real passion or feigned? It was hard to tell with an accomplished courtesan like Miranda. Perhaps it didn’t matter, Rhys decided. Perhaps nothing did.

Laughter and shouting from the rest of the party floated up to his ear, a faint summons from another world. He shoved it aside to focus on Miranda's silky skin.

Steps pounded down the hallway outside the door, but Rhys figured they had nothing to do with him. His only problem was how to unfasten the stubborn flap of his trousers. The confounded button seemed too large to fit through the hole, despite the fact that he was almost certain it had slipped through there with ease when he put the blasted trousers on.

Where was his valet when he needed him?

"Here, let me." Miranda bent to take the button between her white teeth. He ached at the nearness of her lips, but the thread wouldn't give.

A familiar red haze descended on his vision and, for an instant, he was back on the plain near Maubeuge again.

Too much blood. Too many arms and legs. Too many cannonballs. Where’s that relief column? I sent an urgent summons over an hour ago. His horse was dying, screaming its agony as only a dumb creature can. Or a man who knows his immortal soul is about to flee his all-too-mortal body. Have to put him down. Only one shot left…

"Damn the French," Rhys growled aloud this time, closing the invisible portal in his mind that led back to that cursed battlefield.

Then Miranda's real door shattered behind him and the pounding footsteps grew louder, tramping inside his head. The courtesan shrieked and pulled up the sheets to cover herself as the footsteps surrounded the bed.

Rhys turned, but too slowly. Something solid and unyielding caught him on the temple. A black curtain descended on his mind, and he went dark as a Drury Lane stage after the last ovation.